In a search for one, we turn up many…

At a river crossing which in time had fallen under the gaze of a succession of bridge builders. A bit of a who’s who amongst New Hampshire bridgewrights and bridge design engineers, most of these, already spoken of here. Their work demanded, as the winds of time and happenstance, with its January thaws and their flowing ice, and log jams and rouge gales, would in turn destroy that of those they followed.

This Crossing chartered with the stoke of a pen by a man who would one day be the nation’s President. This detail and others in the crossings history brought to us in the words of a John Kimball, one time Building Agent for the City of Concord, in his annual report to the city. With a flair for pared down storytelling, he wrote with a cogency and an ability to be descriptive which is far from common, and almost unheard of in the requisite reports of a city agency administrator – Thank you Mr. Kimball Dutton’s bridge seems to have served well. Though in time fell to a different set of circumstance, in the Spring of 1914 several “auto trucks fell through city bridges” The City Engineer was ordered to inspect every bridge in town. His resulting report recommended that “five bridges be strengthened or replaced with suitable modern structures” Sewall’s Falls was among these. It was replaced in 1915 with a Riveted Pratt through truss designed by John Storrs. (See January ’12 entry – As Mysteries Unfold) This bridge, still carrying traffic into its ninety-seventh year, is itself now slated for replacement. As ammunition in the battle for preservation of the current crossing, a bill was several years ago introduced to rename the bridge after Storrs. While I can appreciate both the effort, (I stand in that camp) and the homage paid. Being that this succession of bridges have shared a common name, that predated even the first construction, I see it as a tie to time which should, like the bridge that now carries the name, simply continue.

Names & Places and Windows through Time

Recently several brief video clips, somehow out of nowhere, jumped to my attention – Simple moments in time, captured decades ago, of two bridges which formerly stood side by side, ( and both of which have been mentioned here on the weblog ) had been digitized, and uploaded to You Tube by the Contoocook Riverway Association, a 501 c3 non-profit that has seen fit to take on the restoration and maintenance, ( I’m sure donations are needed and welcome ) of the nearby Contoocook Railroad Depot.

This first one appeared to me as if almost an apparition – And this not just because of the almost ethereal effect the falling snow seen in it lends, nor the reflected glow of that which had already reached the ground – ( I’m thinking the snow-bright light might be why the shooter chose to take this expensive piece of equipment out into the weather – You have to replay the 10 secs multiple times for detail to reveal itself ) But because despite it having left us Seventy Seven long years ago, just seven years after this piece of film was shot – Through the patch of ground it sat on, and a long familiarity with the sister bridge which we see here releasing a train which passes the far portal of the Village Bridge which picture frames this passing train – I somehow know this bridge – Through research, and photographs and many months spent on-site, and with having imagined how the two bridges and their traffic might have interacted, all the while never having imagined a moving image of all this was somehow somewhere out there waiting to be seen.

Wonderings bring on wonderment, and in seeing these captured moments, I found myself again in wonder after that Bridgewright who left us this Village Bridge. Some sources cite Horace Childs as its builder, with his firm having built the Railroad Bridge which preceded this one, and also having carpentered the other still existing Long Truss in town, and I echoed these sources in an earlier entry. ( See June ’11 entry Railroading Adverts ) This Village Bridges Bridgewright turns out to have been a former apprentice of Henniker’s – H. Childs & Co.

With so many of these guys having trade appropriate monikers, and names that almost too perfectly fit their time. I kinda chuckled in a truth is somehow stranger than fiction sorta way, on how befitting the mans name is. If I were fiction name tasked with coming up with a name for a nineteenth century Bridgewright, I think just such a name, might be that of Dutton Woods.

Such a man did exist, and though the ample list of his life’s achievements is long, and plentied with long span bridges of varying truss types. Most all of these, like the glimpse we see here of this Long Truss Village Bridge, have long since left us.

Born in Henniker in 1809 to Wm. & Betsy, his mother celebrated her sons birth while paying homage to her blood relations, by sharing her surname as Dutton’s given name. After a brief stint in his father’s mill, he entered apprenticeship as a carpenter and bridgewright under the tutelage of the Childs Brothers. He would leave their employ in his 28th year. The very same year he would take a Henniker girl, Hannah Chase, as his bride. He set up shop as a going bridgewrighting concern of his own, and though his long career was peppered with employ by various area railroads, he would continue to cut highway bridges under his own name through to the end of his life’s work

A glimmer of this, and a seeming step backwards – From the 1873 Manchester “Annual Report” In 1850 Dutton left Henniker, for several years settling in Contoocook, before then moving on to Concord, where he would live on through to the end of his time in 1884. A Henniker history suggests “In twenty five years he constructed ten thousand lineal feet of truss bridging” Just months after his death a memorial notice in Engineering News, commends that “Among his best works was the construction of a large double tracked (Double Barrel Railroad) bridge at Goff’s Falls”

The now largely lost Village of Goff’s Falls (In the last two decades gobbled up by a fast growing airport – MHT) is a part of the world I know well, having come up just down-river and over the town line – This would be the also lost double barreled Moore’s Crossing Bridge

This not his only span to bridge the Merrimack in the Queen City. From the 1847 annual report of the City of Manchester – Committee on Finance 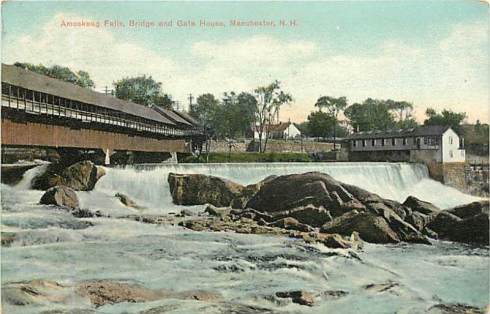 This clip is shot from the Depot, its sister bridge no more. Shot from the same end. This one was arriving, the other, for a time, leaving.