Those of you who occasionally click in on my twitter feed might recognize this image as its background. (click to enlarge) I’d meant to only someday post a blog entry about it. Someday, when I’d moved on from New Hampshire’s historic connection to wooden bridge building. The recent floods however have moved up someday. 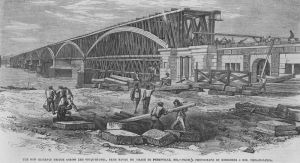 Irene’s aftermath will long be memorable, perhaps in part for video caught as the Bartonsville slipped into the storm swollen Williams River. We still don’t know the full number of bridges lost or damaged, but we do know this image has several things in common with what is perhaps the greatest loss. There is no question that it was the largest lost, and arguably, (and silly, my dog’s better’n your dog, arguments were ongoing) among the very last of the giants, that being New York’s Old Blenheim.

The image is, for a number of reasons, one of my favorites. In part because it shows one of history’s giants. Many are not aware that such wooden giants existed, because they have long since been replaced, usually because they crossed at all too important, high traffic areas. As often, the piers they were built on were far more expensive and time consuming to construct than the bridge they carried, and they were wanted to carry a new span which could carry a higher volume of traffic.

This bridge circa 1866, stood just upstream from the confluence of the Susquehanna with the Chesapeake Bay. It was a fourteen span Howe – Thirteen of 250′ and a Draw Span of 175′, for a total length of 3,500′. It carried the rail traffic it was designed for until the 1906. And then was re-purposed in 1910 for vehicular use, and continued to serve another couple of decades until its removal sometime in the late 30’s. Its Piers still sit idle next to the yet operational Iron Railroad Bridge. 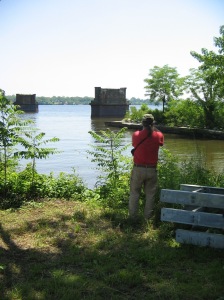 Another reason it’s a favorite, is because, though as photographic technology of the time demanded it is obviously posed, all the same, it captures the actual circumstance of that moment in time. Drawn from a photograph prior to the existence of affordable ways to print photographic images on newsprint, a common technique of the day. It shows us not only the Falsework still in place under the near span, and how that Falsework is designed to interact with the masonary in the piers, and how the seeming ornamentation in the masonry was designed with two-fold purpose to receive that Falsework. We also see crews at work, and various aspects of the bridge still under construction.

The Bottom Chords of the Double Barreled Blenheim

It also pictures two men at the images center. Though only a theory of mine, I don’t see it as much of a stretch. The one in the top hat is George A. Parker, engineer and designer of this bridge built for the Philadelphia, Wilmington and Baltimore Railroad. The man next to him with the cane, is undoubtedly his clerk of the works hand picked lead framer, and Master Bridgewright, Nichols Powers.

Parker and Powers, in building this span, on this stretch of the Susquehanna, which like the nearby Schuylkill, stood host to many of these early giant spans, quite literally joined the ranks of bridgewrighting’s giants. Palmer, Wernwag and Burr.

Among other still existing bridges, he also built the Brown, near his home town of Clarendon Vermont. We are yet to hear how it fares in the aftermath of Irene.

I'm a timberframer and preservation carpenter, and regularly work on Covered Bridge restoration projects. Bridgewrighting can be a tough row to hoe, for a myriad of reasons. From scheduling issues to differing opinions and philosophies on what is appropriate in methods and materials, to multiple jurisdictions still not sufficiently vetting bidders resumes - Which is to say, just because a company is on that state approved list and capable of building that seven figure overpass, this does not mean they are capable of restoring a wooden bridge... So, I have much to say about all this and more - And despite my tough row observation, I promise not to whine. END_OF_DOCUMENT_TOKEN_TO_BE_REPLACED
This entry was posted on Thursday, September 1st, 2011 at 4:31 PM and tagged with Bartonsville, Blenheim Bridge, Irene, Vermont and posted in Bridgewrighting, Covered Bridge, Maryland, New Hampshire, New York, Railroad, Timberframing, Vermont. You can follow any responses to this entry through the RSS 2.0 feed.
« Living Memory
Tropical Irony »

5 responses to “Lost to Evermore”